It was one of my childhood dreams, to watch the snowfall and to play in the snow as long as possible. Living in a South Indian state, watching snowfall remained like a dream because we always get a tropical climate. A few years back, there was no plan for me to travel outside India, so the one and only one option to enjoy the snowfall was to travel to Himachal Pradesh (north Indian State). But the season I chose to travel to Himachal Pradesh was in February and by that time, winter was almost over and I couldn’t see any snowfall. Again I waited few more years and my plans got changed and I reached New Zealand for my further studies.

New Zealand! A dream destination for a lot of people across the world. I reached New Zealand in February 2021. A couple of weeks later, I traveled to Mount Cook with my friends, expecting some snowfall. My expectation of Mount Cook was long roads with snow on either side. No. February is not a great month to see snowfall in New Zealand. We were really sad to see mount cook that summer, without any snow, with dry grasses on both sides, hot weather, dry lakes.  Two months later, winter started in New Zealand. I was really surprised to see ice crystals above the grass, on the top of my car, and on the car windows. Maybe because it was the first time in my life getting such an experience. In that winter, I again traveled to Mount Cook, Lake Tekapo, Queenstown, Milford Sound, Arthurs Pass, Mount Hutt, etc. I was able to see the real snow on the ground but not a snowfall. During the polar blast of October 2020, one of my friends in Dunedin send some snowfall videos. Unfortunately, I was not able to travel at that time due to my study schedule.

From December onwards, New Zealand moved to the summer season. There were a lot of activities I managed to do at that time. Visited many beautiful destinations on the South Island such as West Coast, Nelson, Picton, Akaroa, etc. Finally, the summer season ended, and it is winter again in New Zealand. It’s been over 1 year in New Zealand and now I know how to plan a trip, how to check the weather service before traveling, and know more about most locations on the South Island. So, I didn’t see any reason to miss snowfall this winter (2021).

From May 2021 onwards, I started checking Weather prediction webpages to see snowfall chances on weekends. Being busy with work, I can’t take leave on weekdays for a vacation. Finally, on 8 August 2021, met service predicted heavy snowfall across South Island. So this is the best time to see the real winter feast. I contacted a few of my friends and they were also interested in joining me for that day. The original plan was to travel to Arthurs Pass for a drive. let’s see what happened in-between.

I was really excited to wake up early in the morning. The plan was to start the trip at 9 am, so had my breakfast and went to friends apartment to pick them up. As usual, two of them were still sleeping. Anyway, I managed to get them up, packed some food, and started the most awaited journey. Once again, checked the Weather service and it is showing heavy snowfall on the way to Arthurs Pass.

There are a lot of exciting things to see on a road trip from Christchurch to Arthurs Pass. In winter, snow-peaked southern alps are the main attraction. While traveling through the Canterbury plains, we could see these mountains covered with snow from a long distance. You will get a lot of opportunities to take pictures with the southern alps as background. But, today’s attraction was something different. Most of the vehicles coming from the opposite direction had fresh snow on the top and on the window shield. Hurrah! There is snow on the other side. The weather map is right.

Sheffield Town Welcome us with Snow

We traveled all the way through the old west coast road and reached Sheffield town where we got the first snow. All of us got excited to see the snow for the first time and stopped the car on the roadside. Now What? Take pictures? No. I don’t want to take photos now. Instead, I wanted to run through the snow for at least 5 minutes. Without wearing a jacket or thermals, I walked in the snow until I started shivering. My friends took some cool photos, Indeed these moments should be remembered forever.

Wandering Cattle in the snow

New Zealand’s countryside feature sprawling farming landscapes with sheep and cows as major livestock. Whenever you travel outside a city, you will find wandering cattle such as cows, deers, sheep, horses, etc. No matter the season of traveling, you can see all these farm animals on either side of the road.

I have seen all these animals before, but watching them wandering in the snow is for the first time. We haven’t seen any special precautions taken by the farm owners for these cattle if it rains or snows. Spending a long time in the snow may not be a problem for sheep as it has thick wool to protect themselves, but wonder what happens to cows, deers, and horses during snowfall.

Road Blocked at Springfield – Coffee & Snacks From a Local Cafe

As I said, we were planned for a trip to Arthurs Pass from Christchurch. Unfortunately, due to heavy snowfall, the roads to Arthurs Pass were blocked at Springfield, a small town in the Selwyn District of Canterbury. We made a chat with the Traffic Management Supervisor about the possibility of reopening the road. He told us that, there is no way we can cross Springfield. The roads will definitely be closed until 5 pm and then a decision will be taken based on the weather. So what should we do next? Spend the rest of the day in Springfield and enjoy the local attractions.

Everyone started hungrily and we get into a local cafe for some coffee and snacks. Since the roads were blocked, most of the travelers who were on a trip to the other side, ended their journey at Springfield and now spending the rest of the day over there. So the Springfield town and local cafes seem more crowded than usual.

We bought coffee for all of us and shared some chips. It was really cool experience having hot coffee and some snacks during snowfall.

Next nearby attraction in Springfield was the railway station, through which the Tranzalpine train from Christchurch to Greymouth passes. The train will stop in Springfield only if someone has made an advance booking and set Springfield as their boarding station.

We decided to have a look at the railway station to see how it will be in winter. There was no train service on that day due to bad weather, so it was safe to walk through the railway track.

We all got enough opportunity to take pictures with the railway station, train and railway track as background and it was really cool experience.

After returning from the Springfield railway station, we decided to spend the rest of the day at Springfield Park. The park was really crowded with travelers especially kids who were keen to play with their peer group. It was really nice to see kids throwing snow at each other and felling down in the snow.

What to do to make this day more creative? We decided to make a snowman, which will be fun and creative. 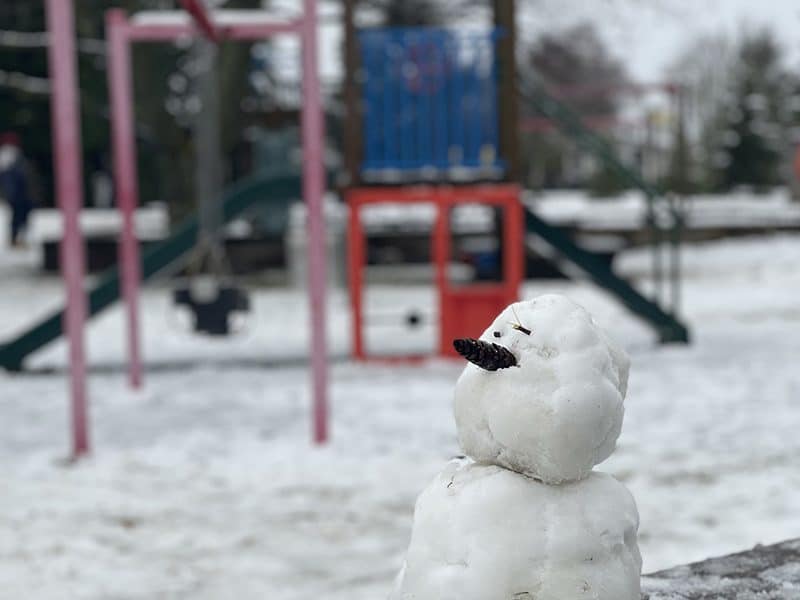 We couldn’t find enough fresh snow in the park may be because people keep walking and made the snow dirtier. So we made a small snowman for fun.

Way Back to Christchurch

It is 5:00 pm and all of us have to get back to Christchurch. After spending the whole day walking, running, driving, and diving in the snow, all of us were really tired. Just before leaving Springfield, once again the sky showered thick snow to the ground. No. I don’t want to get out of the car for any reason. I already changed my clothes a couple of times and I don’t have any more spare clothes. I Lay my head on the side window and watched the snow hitting the ground. Still, there were many kids playing in the snow.  So after 26 years of waiting, with the satisfaction of seeing the snow, I returned back to Christchurch. Tomorrow, I have to go to work and I will explain my first snow experience to my office mates.